The reputation of the Chupu Charter as one of Oahu’s top charter boats is most likely because of our success with Dolphin (Mahi Mahi) fishing. From April through October, large schools of Dolphin (Mahi Mahi) travel through the waters off Oahu. Finding these schools takes the ability to read the signs offshore, patience, and most of all perseverance. Based on our experience, there are two different approaches to Dolphin (Mahi Mahi) fishing that work well when fishing off the north shore. First, you can pick a known area that the fish have been known to congregate in and stay there and wait. The second approach is to spot and stalk them. We like the second approach better because you are on the move and looking for signs of life. Either way, you have to be constantly aware of your surroundings, know what to do and when to do it, and most of all be prepared because when we find the fish, things happen fast!

When a school of (Dolphin) Mahi Mahi is located, it’s time for some serious action. We may choose to set up a “bait and switch” pattern. In this tactic, some of the lures are replaced with mackerel or strips of tuna. The fish are attracted to the boat with a “teaser” (a large hook less lure) that attracts their attention. When they are close to the lure, they smell the fresh bait. This technique gives the crew an opportunity to change rods and break out the light tackle to make the fight more exciting.
Watching four or five huge Dolphin (Mahi Mahi) race in and take a bait just a few feet behind the boat will make an angler out of anyone. If you aren’t fighting a fish, get out your cameras. Dolphin (Mahi Mahi) is one of the most colorful and acrobatic fish you will ever see. This is a great trip for anglers interested in maximum action. 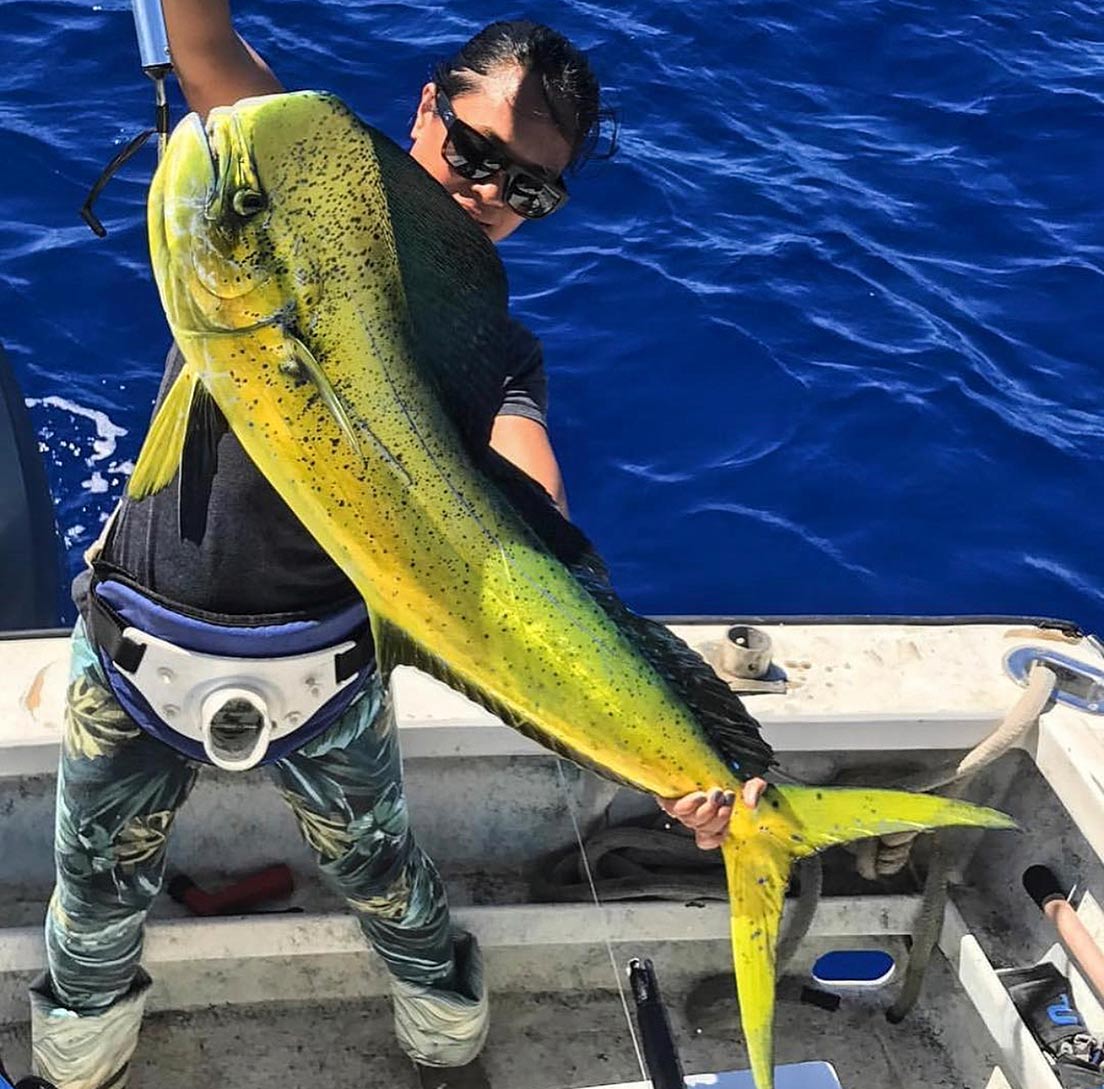 The Dolphin-fish (Mahi Mahi or Dorado) are surface-dwelling ray-finned fish found in off-shore tropical and subtropical waters worldwide. They are one of only two members of the Coryphaenidae family, the other being the Pompano Dolphin fish.

The name “mahi-mahi” (“strong-strong” in Hawaiian), particularly on restaurant menus, has been adopted in recent years to avoid confusing these fish with proper Dolphins, which are mammals.

One of the fastest-growing fish in the ocean, Mahi Mahi are fast swimmers with an estimated top swimming speed of 40 knots.

Mahi Mahi have a lifespan of no more than three to four years.

Sport catches from around the world average 15 to 28 pounds. In many places they seldom exceed 33 pounds, but in Hawaii 40-50 pound Mahi Mahi are common.

Mahi Mahi are distinguished by dazzling colors: golden on the sides, bright blues and greens on the sides and back. When they are removed from the water, the fish often change between several colors including brute yellow, blue and silver, finally fading to a muted yellow-green upon death.

Mature males have prominent foreheads protruding well above the body proper. This feature allows for easy sexing of the fish. The large blunt head shape is the main reason why male Mahi Mahi are commonly called “Bulls”. While their female counter parts are commonly called “cows” or “hens”.

Mahi Mahi are carnivorous and ravenous. They will feed on flying fish, crabs, squid, mackerel, and other small fish and can commonly be found around flotsam. They have also been known to eat zooplankton and crustaceans.