Call them Yellowfin, Bigeye or Ahi it’s all the same when your rod is doubled over, your arms ache and all you can think about is landing the monster on the end of your line. But wait, there are two or three other rods bent over with line peeling off the reels at an alarming rate! Oh man, this is going to be a great day!!!

Spend a little time looking at the photo galleries on our website and it will become very clear that if you want to go Tuna fishing in Hawaii, Chupu Charters is the best choice. Many of the techniques that we have been using for yeas are just starting to be tried by other charter and commercial boats in our area. They are making the mistakes that we made years ago.

Combine that with that fact that we are still learning, experimenting and perfecting the art of finding, attracting and catching the most prized fish in Hawaii. How do we do it? That seems to be the question on a lot of people’s lips. Well here is our little secret, we use live bait! And we have been doing it for years.

For most people from other parts of the world that doesn’t seem like much. But in our area no one used live bait on a regular basis. Being able to adapt our style of fishing and incorporate a newly found resource sets us apart from almost every other boat on the island. We are convinced that live bait is the most effective method to catch tuna in the areas that we fish. Show up in the tuna grounds with a live well of bait and the Yellowfin and Bigeye Tuna fishing can be nothing short of spectacular.

Well after four years of easy fishing the word finally got out and some of our secrets have been exposed. But rest assured if you fish with Chupu Charters you will be fishing with the originators of live bait Tuna fishing on Oahu’s North Shore. We have been doing it the longest and still do it the best. And we have the photos to prove it.

Take a look While the majority of Tunas under one hundred pounds are being caught on live bait, most of the larger fish are still caught on lures. These schools of one hundred to three hundred pound fish are often hard to locate. Seeing pods of Spinner Dolphins with a few sea birds diving and feeding is a pretty good place to start looking.

Like Blue Marlin fishing, hunting for large Yellowfin Tuna is a waiting game. It takes time and patience and multiple days on the water greatly increase your odd for success. One thing holds true with all styles of big game sportfishing, the rewards are amazing and the memories last a lifetime. 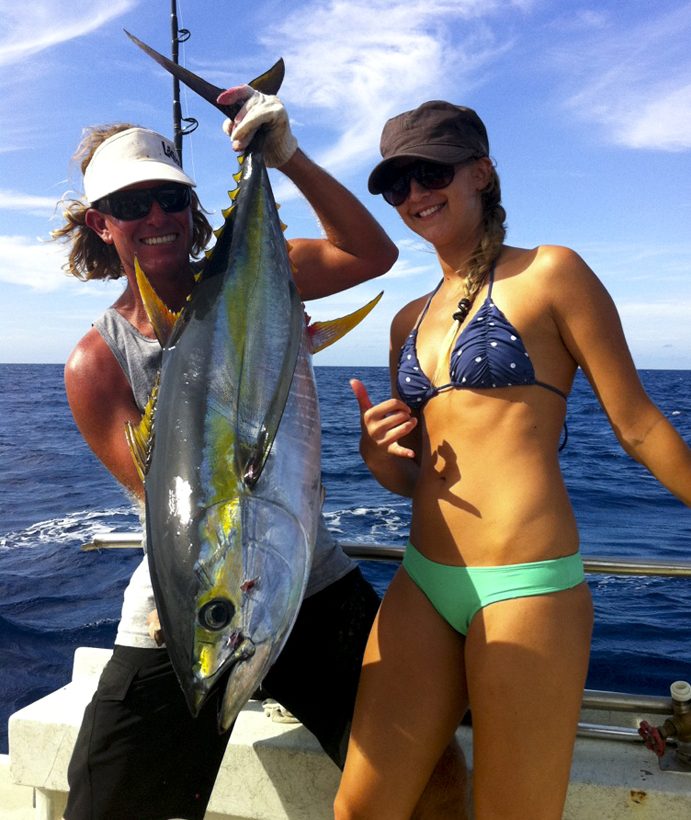 The Yellowfin Tuna and the Bigeye Tuna are two types of tuna found in Hawaiian waters. They are found offshore in open waters of tropical and subtropical seas worldwide. Considered a pelagic fish ranging in the top 330 feet of the water column. Bigeye tuna look a lot like Yellowfin. They are hard to distinct sometimes. Body color is dark metallic blue on the back with a grey-white belly and an iridescent blue band running along each flank. The dorsal and anal fins are yellow. Mature Yellowfin will have long streaming sickle fins that are bright yellow in color. Bigeye Tuna have larger deeper bodies with slightly larger heads and eyes. Bigeye can swim to greater depths than Skipjack and Yellowfin, and therefore have more fat to insulate them from the cold water. This makes them especially attractive for the Japanese sashimi market. Yellowfin and Bigeye Tuna are a popular sport fish in many parts of their range and are prized for their speed and strength when fought on rod and reel as well as for their table qualities.

Both Bigeye and Yellowfin tend to school with fishes of the same size, including other species of tuna, and larger fish are often seen with dolphins, porpoises, whales and whale sharks. They are known to eat other fish, crustaceans, and squid. Popular fishing methods include trolling artificial lures, chumming with live or dead fish and fishing used trolled live or dead bait.